Zippy and Me
By Ronnie Le Drew with Duncan Barrett and Nuala Calvi
Rated: *****

I am pleased to be on the Blog Tour of the book Zippy and me. This book is the first behind-the-scenes look at the now legendary children’s TV programme Rainbow, which ran for more than two decades. 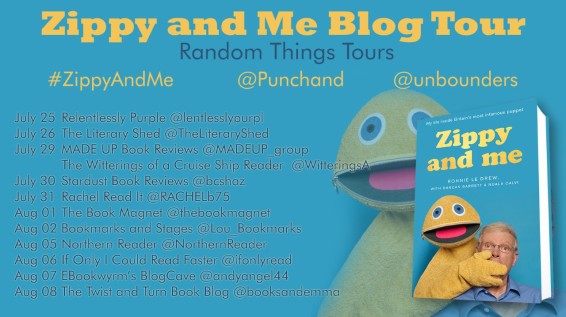 Ronnie Le Drew is one of the UK’s most respected puppeteers, and recipient of the prestigious Harlequin Award.
He has operated many of the most iconic children’s puppets of the twentieth century – Zippy, Sweep, Muffin the Mule, Bill and Ben, Brains from Thunderbirds – as well as working on classic puppet films such as Labyrinth, Little Shop of Horrors and
The Muppet Christmas Carol. He continues to work regularly as a puppeteer in TV,
theatre and advertising and also teaches at the London School of Puppetry, which he founded in 1987.

Over the course of almost half a century, puppeteer Ronnie Le Drew has worked with the greats – from David Bowie in Labyrinth to Michael Caine in A Muppet Christmas Carol. But the role that defined his career was Rainbow’s Zippy, who he operated for more than twenty years.
Zippy and Me is the first time a Rainbow insider has told the true story of what went on under the counter and inside the suits: the petty squabbles between performers, wrangling with TV executives, and scandals such as the ‘love triangle’ between musicians Rod, Jane and Freddy. Not to mention the now infamous X-rated episode shot for an ITV Christmas party, which subsequently found its way to the Sun.
Interweaved with the dirt on what really went on behind the scenes is the story of Rainbow’s heyday in the 1970s and 80s, when its stars found themselves catapulted into an exciting showbiz world – scooping a BAFTA award and even performing for the queen – and the story of a young lad from a south London council estate who defied his parents’ protests to became one of the most respected puppeteers of all time.

The book has an entertaining foreword by comedian Richard Herring about the time when he met Zippy and was so in awe. It’s an excellent way to begin this book and thus being thrust back into the rather simpler life of early childhood of watching Rainbow. Rainbow, for anyone who does not know, was a long-running children’s tv series with Geoffrey at the helm and then there were Rod, Jane and Freddy and some puppets called Zippy, Bungle and George. How I was glued to the television when this was on. I even still remember the theme tune, later I learnt that the theme tune was worked on by none other than Hugh Fraser who played Captain Hastings in Poirot and other tv programmes and has also written books. What we would not have been aware of as children, was that Ronnie Le Drew was the puppeteer for Zippy for over 20 years. It defined his career as a puppeteer, but that wasn’t his only role. Yes, Rainbow was a very fun and cool programme. but he has also worked with some other very cool people such as David Bowie on the film Labyrinth and Michael Caine in the film – A Muppet’s Christmas Carol.

Ronnie Le Drew’s enthusiasm for puppeteering comes across from the very first chapter. It oozes with this positivity and energy as he writes letters for advice and attends a puppet theatre. It isn’t all plain sailing though. The writing means readers will really get the sense of the shock of his dad dying. This has real emotional impact and will do, with any reader. It really is heart breaking to read as home life becomes more of a struggle. This could not have been easy for Ronnie Le Drew to have written and re-lived, even all these years on. There’s a real sense to be had in the devastating loss of his job at Little Angel too. The one place he could go that seems like it felt a safe place and one, he describes as a place of solace. The writing of this time feels like it is heartfelt. Ronnie Le Drew has captured me as a reader. I am interested in his life. I feel like I care and care enough to really smile when I see his life start to change for the better, the more into the book. This is the power of his writing. The book has become, for me, at this point, more than just the fact it is really cool to read about Rainbow. I’ve been captured by every aspect before that job too, headed up by Pamela Lonsdale. It is fascinating to read how it all began and how Ronnie Le Drew landed the job. There’s an air of down-to-earthness about it all. I rather like that. Still, the puppeteer, when Rainbow wasn’t being filmed, due to the end of series one, he went back to where he began, at Little Angel, where there were spats, but rectified. I really got the sense that Rainbow excited him when the calls came for even the second series, but he wanted to play it coolly and professionally. There’s plenty to discover in this book, such as Matthew Corbett from the Sooty Show, as worked on Rainbow for a while and Le Drew began working as Sweep and there’s some great stories from this time too.
There’s a real sense of the physical demands on a puppeteer, which really might be overlooked when being a child especially, just watching on at favourite characters. So, there’s a real behind the scenes feel to what is written within the book. What appeared to be seamless, wasn’t the case at all. It is however, more interesting that the puppeteers were overlooked by the producers. The real frustration of this really comes out in the book. It gives readers a real insight. There’s also an insight into all the innuendo that went on within Rainbow, including in script form. There’s also an insight about the relationships and there’s a sense of real worry again from Ronnie Le Drew when so-called scandals came out about Rod and Jane. All the while, there is still a down-to-earthness about Ronnie Le Drew and how he saw his working life being a bit surreal.

It is interesting to read how doors opened into the more surreal world of American puppetry and films like Labyrinth and Little Shop of Horrors and yet he duly returned to Rainbow and also to the Little Angel Theatre. I get the sense it can’t have been easy re-living the splintering of Rainbow and also the failing health of John at the theatre. This however is far from a “poor me, sob story”. This, I get the feeling, is telling it how it really was, including the politics of the time, such as Margaret Thatcher (which now explains a lot about tv my brother and I watched growing up, suddenly disappearing, along with a lot of other things, that at that time just felt odd, but didn’t understand), was ensuring much was axed, something that even with the fact that the next job was on A Muppet’s Christmas Carol, still perhaps played on Ronnie Le Drew’s mind. There’s certainly a sense of this. Even though he worked with David Bowie and Jim Henson, there’s still a reality that always seems to kick in as Ronnie Le Drew seems surprised at getting roles. I have to say, it seems all quite endearing and I get the sense that this is all written from memories and the heart. There’s no bravado here. He doesn’t name-drop for the sake of it, it was a huge part of his life, working with, who we now would say were cool people.

It’s interesting to read about the move to Yorkshire and the feelings that came with that and failed revivals of Rainbow and how still other jobs came in, such as with Phillip Scholfield and then Rainbow again in a whole different format.

The book is full of ups and downs and many emotions, all captured beautifully in words on the pages. It isn’t just readable because of nostalgia and a natural curiosity about what happened to people who worked on Rainbow, but because of the sense that this is an ordinary man who did some extraordinary things within puppeteering and yet seems humble about it. This book is well set out and reads like a time-line of events and that works well for me. This is more than just Zippy and Ronnie Le Drew, this is a book that may inspire others who are in jobs that are precarious and indeed, into becoming puppeteers. It’s also a book about life, working relationships, family and all that comes with all of that. There’s warmth, there’s sadness and there’s fun within these pages. There’s revelations and reunions, none which seem sensationalised in any way, but are written with a dignity and in a matter of fact way. All in all, it is a brave and impressive book from an author who, we may not have all known his name, but who we were all so aware of as children and now also as adults because he has been working on modern puppets in advertising and other things that we all see. He has also never forgotten his roots. This is a fascinating read from someone who the public don’t really see, but all know the characters he has played in puppeteering and would give hope to anyone wanting to follow in his footsteps. Even for people not wanting to follow in his footsteps, it is absorbing and a book that shouldn’t be skimmed over. It has different levels of depth and emotion to it and it is interesting to read about all the comings and goings on Rainbow, but also what happened before and after the show ended.

I highly recommend this book. This book would interest anyone who has an interest in puppeteering or liked Rainbow or liked Seeing Things: A Memoir by Oliver Postgate, Jim Henson: The Biography by Brian Jay Jones.