Who? What? When? Why?
A Review of a Panel at Morecambe and Vice Festival

This panel was created by best selling crime novelist William Shaw. What can crime fiction tell us about the way works? With 3 Academics who are avid crime readers – Mary Evans, Hazel Johnstone and Sarah Moore. Crime writers – William Shaw and Gytha Lodge. William Shaw kept a certain pace for the panel and skillfully eased everyone from topic to topic and the others answered and also  created discussions that were intelligent, informative and thought-provoking.

William Shaw’s latest book is Deadland. The book tells the story of 2 teenage who are so disengaged with the world they live in, but have a strong sense of wanting to help each other in all their complexities. It is up to DS Alexandra Cupidi to solve the case. William Shaw is praised by Val McDermid, Peter James and Peter May.

Gytha Lodge’s latest book is She Lies in Wait. It is about six friends, a dark past and one killer. It is up to DCI Sheen to crack the case when 30 years later a body is discovered and to work out who is lying as everyone becomes a suspect. Gytha Lodge is praised by Val McDermid who says it makes hold your breath and gasp out loud.

Quick Facts
60-70% of readers read crime.
There’s a new respectability to reading and writing it.
More women read crime than men.
Men win the most prizes

This was such an intriguing panel, especially with the title that was given to it. This wasn’t your usual panel. The festival certainly seems to like to bring something different onto the stage.

Crime books were discussed in different ways. This was about what crime books have to say and the sociology and coverage of the genre. Although there were academics, this was not at all heavy going. It felt more like an informative and relaxed talk rather than a lecture. It was entertaining, fascinating and well-formed and relaxed for the festival audience.

There were interesting points that were made. One of the first ones being about the National Press and intriguingly, since crime is now such a hugely popular genre, doesn’t seem to feature as much as other fiction, especially those in the light entertainment segment of fiction, with lighter plots.

The discussion began to move in a different direction as they decided they were all fans of the golden age and talked about Agatha Christie’s subversive character – Miss Marple, whom I sensed they had a soft spot for. The academics wanted to chart a shift from the golden age to the 70s, when noir began to emerge. They discussed how writing moved on and how their began, as there is now, more of a political and social consciousness about the causes of crime being written about. Writing also changed in how the police were seen, no longer were they as nicely well behaved as they were in what is dubbed as the “golden era”. This made for an engaging talk about the change in style and the approach within the crime fiction genre.

There was much interesting talk in the sociology of crime and how it shows the internalisation of positive and negative values. The panelists pondered over sociology as a subject has missed the powerlessness and unrest, which is added into crime fiction.

The panel moved on when William Shaw asked about the narrative in storytelling. It seeemed to be concluded that the narrative was very important and that conventionally everyone wanted to know how a story ends. This is true, for me anyway.

The why and how also really kept my attention and it seemed the rest of the audience’s too, when they talked about the fabric of people’s worlds and how it isn’t always the “who” in the stories that keep readers reading.

They covered gender in crime books and also how there seems to be an appetite for true crime, especially on tv, as they reflected on The Confession, which is on tv.

They concluded by talking about how crime is now colonising other genres. It got me thinking, there is a lot going on in crime books, there isn’t just the crime, but there’s the psychology and also sometimes some romance and other genres feature too. They also talked of the trend to feature women detectives as well as male detectives and to show just how, for both sexes, the job can be incompatible with domestic life. I liked that they included both genders in this and they weren’t stereotyping anyone, they were just saying how it can be for everyone with the hours put in etc.

They rounded off by going back to the golden age and addressing the question about whether it is possible to write crime as a period piece and to take a book as a thing within its time? This was an yet another excellent question. They pondered this and decided that it can be difficult to keep to a certain line, with modern thoughts, but to not have a period piece become so ridiculous that piece of writing becomes too modern. This was a point so well made, I reckoned as the writing would then lose the fact it is historical and no one could learn anything from the past or get any sense of different times. They discussed how it can be difficult as times have changed and it has to be so worked out what would be acceptable and also about how in the past there are things that are spoken about much more freely now than they were in earlier years.

This was another fascinating panel and to hear about crime fiction from such a broad and different angle brought new and different insight.

I thank William Shaw for allowing me to take a photo of him and also for him reckoning him and I should have a selfie. I also thank him for the nice chat. 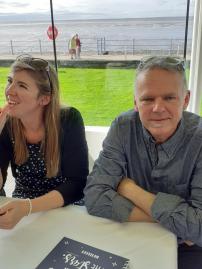 Both authors also have more books to come in 2020.