Alison Belsham was moderating this panel and kept it all flowing very well.

She writes procedural crime. Her debut novel was The Tattoo Theif, set around a Brighton Tattoo Convention. A youthful, fast-tracked DI is on the case to find out who has literally been cutting off tattoes. Her latest novel is – Her Last Breath.

Alison has some great anecdotes about getting a tattoo.

Robert Scragg writes police procedural. His second book is out this year.
What Falls Between the Cracks was his debut novel, set around a 30 year old crime scene, where there were notions of what could be the perfect crime. The woman who owns the flat hasn’t been seen since the 1980’s and yet no one had looked for her.

Margaret Kirk writes the DI Lucas series, set in Inverness. Shadow man is first in series. It introduces DI Lucas and his team and Anna Murray, sister of murdered woman. She says the subplot forms ongoing story arc.
In her second book, there is a 70 year old case tied up with modern case.

Rachel Sargeant has written 3 books. Perfect Neighbours is set in Germany. It came out of experience of being army camp in Germany. Inspired by a crime she read about in papers and closed community.
The second book is  The Good Teacher and The Room Mates being her latest.

They spoke about what their winning moments were. They told their stories most humbly, which I liked. They seemed to be quite grounded. It was perhaps quite apt that this panel came after the one about festivals because both Alison and Robert pitched at festivals. Alison pitched at Bloody Scotland and Robert pitched at Harrogate and at Newcastle Noir. It was interesting to hear some of the ins and outs of pitching and how they had only a few minutes to pitch and they got professional critique and feedback.
Alison won the Bloody Scotland pitching competition and had an agent take her on.
Alison’s advice is to pitch at these competitions as it is a chance to make an impression.
Robert – says he also went to workshops run by other authors and gives opportunities to pick their brains.
Pitched in front of Mark Billingham. He has a day job as well as writing and reckons everyone wants others to do well.
Margaret – took a different route. Wrote short stories. Good feedback after entering comps. Sent Romantic Novelist Association for free feedback. She went to a workshop with Val McDermid and Louise Welsh. She entered a short story competition. She won and she got an agent and publishing deal.
Her advice is that there are many paths to publication. Seek the one that suits you.
Rachel – creative writing workshop, had to write a little for 5 mins, good feedback. Saw a short competition and in time, the story grew to around 80,000. Harper Collins took her on. It means she will keep going. She felt that first win legitimised her and she kept going.
It was interesting to hear that, even though they are published, they still go to writing groups, whether it is a local one or one online. I’ve noticed this about a few authors.
This was another great panel and it was better than what I thought it would be all in all. The insights were all interesting and hopefully it will make the reading public think a little bit more about what they are buying into when they read books. Hopefully people will have gained some knowledge about what goes into being an author.
Sunshine Moments
The theme this year at the festival was sunshine moments. This is the authors sunshine moments:
Rachel met 3 writers at a summer school. Put into a syndicate to share and critique each other and are her ray of sunshine.
Margaret says the  crime writing community is supportive.
Robert mentioned when he was at the Harrogate pitch, he saw someone who is aspiring an author and saw the same guy in Stirling plug his book.
Robert talked of doing library events and was asked if he could give feedback on someone else’s work too. He remembered that he had been there done that and was in a position to do that and humbled someone wanted to so that. Margaret will also do this. I love that they do this to benefit others.
Alison went back to pitch perfect at Bloody Scotland. She talked of  Susie, whom she taught, who then went on to win the competition.
Rachel talked of valuing book-bloggers and thanked them all. For me, this felt so lovely and nice as there are so many of us working for free, writing reviews, articles etc in our free time to try and get authors work known to people too. It was most humbling and lovely and so unexpected, to hear a thanks to all book-bloggers, verbalised at a festival like that, so I thank you for this.
I thank the authors for allowing me to photograph them. 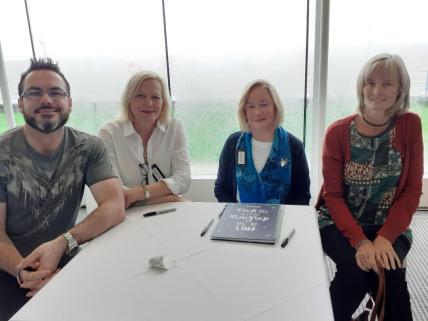