I was pleased when Caroline Vincent approached me to be part of the blog tour for what turned out to be not only a delightful Christmas read, but also an adventurous detective story all rolled into one that will make a great bookish Christmas present for any 10 and YA reader. Today is my turn to review this book. 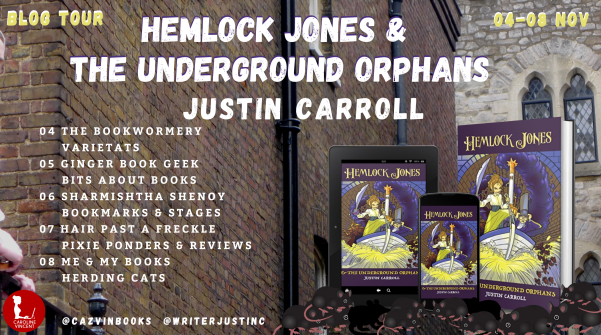 Justin Carroll is an author who balances his love of comic books and games with a passion for martial arts and musicals.

Ever since he stopped wanting to be a dinosaur, Justin wanted to be a writer. He graduated with a degree in English Literature and Language from King’s College, London in 2004 and now, when not writing, he fritters away his time on all manner of geeky things.

Shortlisted for several international short story competitions, Justin was a finalist in the 2010 British Fantasy Awards with “Careful What You Wish For” (Wyvern Publishing) and placed in the top twenty of the NYC Midnight Short Story Challenge twice.

Now, Justin has published the second book in the Hemlock Jones Chronicles: Hemlock Jones & The Underground Orphans, perfect for all fans of 10 years and above of adventurous detective mysteries!

When orphans vanish from their beds across Victorian London, twelve-year-old demystifier Hemlock Jones and her companion, Edward, take the case!

This time, the trail will lead them from their Baker Street home, along lost rivers and into the heart of the city, to face exotic enemies and a charming man with dark plans…

Hemlock Jones & The Underground Orphans is the second of the Hemlock Jones Chronicles, the award-winning series of detective adventures for children and adults.

A children/YA story that is perfect for Christmas, It certainly isn’t fluffy. This is a quick paced mystery that will keep readers involved, but it is very much set around and during Christmas.

The cover is eye-catching and immediately spells out trepidation, action and adventure. I already started to have expectations of a good thrilling detective story. It takes place in the north of London, where readers will be transported back in time to workhouses and an orphanage, where readers meet Mr and Mrs Thicke who work there and have reported the disappearance of orphans. It already has a very Victorian air about the story.

The story is intriguing and keeps a decent pace and the style of writing is what draws the imagination and desire to read further into the mysterious Victorian London, Justin has created, blending fact and fiction so well.
There’s adventure to be had and a mystery to solve, that takes Hemlock down a sewer. The atmosphere and the descriptions, such as beady eyes looking on are well done and in a way that sets the tone.

There may be pirates afoot and there’s mild trepidation as the orphan’s lives may be in danger. There’s some swashbuckling that bravely goes on. The pace by this time, I decided was terrific. The story just keeps moving on and the time (or pages), between the orphans going missing to readers actually “meeting them” is good, but not too fast that anything is missed. There is the journey above to under London to find them.

There is some welcome humour within the book as Hemlock Jones and her associate try to decide just who the pirates are and if indeed they are and there is quite a mystery surrounding this.

Whether above or below ground within the story, the geography for setting each scene is great and well-written, but still keeping up the pace of the mystery.

The elements of the story that don’t involve the mystery, such as Christmas Day is just as well-written. Christmas Day sounds delightful. The story keeps moving onwards with a mysterious interruption to proceedings and a concern that it could be due to N – their nemeses.

All in all, it is a good story, fairly reminiscent of Charles Dickens and Arthur Conan-Doyle’s stories, which I hope one day the readers will venture into as well, but it sits pretty well in the detective genre and it feels right for the era it is set in. Hemlock Jones sits somewhere nicely in-between those 2 famous authors works and sits well for the aged 10 plus YA age groups and is a good series for readers to get stuck into and explore London and follow the main characters to see if they can solve the mystery and find out who the pirates are and what happens to the orphans.

The conclusion is great and keep reading onto the epilogue because there is more to this mystery than meets the eye as it isn’t just about the missing orphans. There’s more to be solved and to discover that, there is another book too, just waiting to be read.

I recommend this book. It will sit well within the reading for pleasure trend and will make a lovely Christmas present for all genders.