First in the Fight – 20 Women Who Made Manchester
By Helen Antrobus and Andrew Simcock
Rated:5 stars *****

I am delighted and very excited to be part of this blog tour for the People’s History Museum for their book – The First in the Fight. Expertly put together by the historian and author Helen Antrobus and Andrew Simcock, this book celebrates women who yes, are important to Manchester, but in-turn, also made a huge impact on the UK as a whole, which we still see today. So, whether you are in Manchester or elsewhere, please do take time to find out what this book is actually all about. It covers more than you would think in the lovely short sections that are just a few pages long. They certainly keep the interest going and that want to read on.

Click here for a link for blog tour organiser 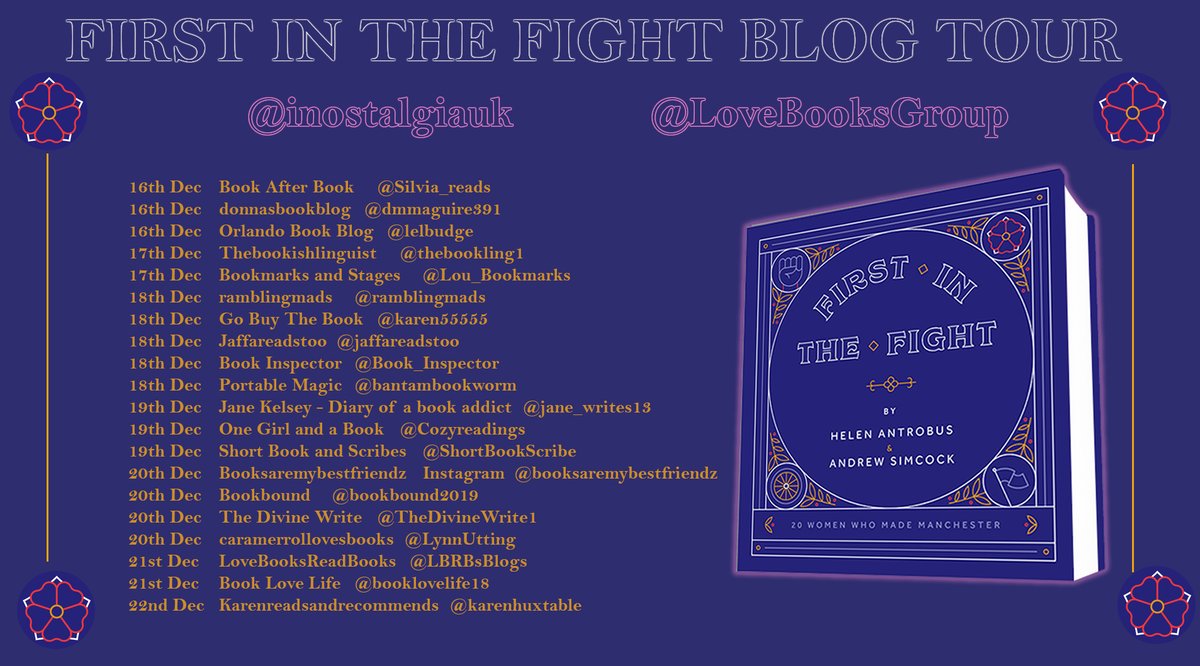 Emmeline Pankhurst stands proudly in St Peter’s Square, but she stands for so many more… From the women who marched to St Peter’s Fields flying the flag for reform to the first entrepreneurs, the women of Greater Manchester have long stood shoulder to shoulder in the fight for equality and social change. For the centenary of some women being able to vote in 2018, the journey began for a statue to be erected, symbolising the incredible lives and achievements of Manchester’s radical women. Glimpse at the lives of the twenty women who were long-listed in the campaign, who all made Manchester first in the fight for freedom, and feminism.

Behold these women who stood up for women’s rights. Some for the right to vote, others for workers rights and there are other women who inspire for other reasons as well.

This beautiful book important, influential women who have made a great impact, not just in Manchester, but across the entire UK, your mind may turn to the Pankhursts. The book does cover them, but there are also women who have done great things, who are less known or in the midst of time have been largely forgotten about, with their being at least one, almost being erased from history altogether.

This is a book I would recommend to anyone wanting to know more about social and political history and the women’s lives who were part of change or achieved great things that weren’t within the political sphere too. That’s what is so great here, is the variety of women who are showcased in this book.
The book nicely starts off with a very interesting bit about Manchester and its history before taking each individual women and allowing readers to learn something about who they were and who they became. It certainly is a valuable book full of substance. It is beautifully presented in the way it is written, with each woman just having a just few pages about them. It is also very well illustrated from the cover right down to the pages inside. Even the front cover seems fitting and eye-catching.

Let me take you on a short journey in tim to whet your appetite for reading this book.

The women who have been so well researched for this book are:

To conclude, this is absolutely a fascinating book to read a really worthwhile getting. There are so many interesting parts that aren’t specifically about the women mentioned too, such as how it came about that there would be a statue for Emmeline Pankhurst and the work that went into that. There are well presented photos of this too, which were taken in very recent times. I highly recommend this book for anyone to read.