I came across Larraine S Harrison on social media and got interested in her book – Red Snow. The title and the cover grabbed me, so I looked further into it and the blurb interested me even more, so I figured I would chance my luck and ask her if I could review her book. Thankfully, Larraine agreed, so today, I present my review of Red Snow, which tells the story of Megan – a strong, independent girl who wants to resolve the mystery of what really happened to her mother once and for all, so that she may know the complete truth.

I thank Larrine S. Harrison for sending me a copy of her book.

Larraine S Harrison is a retired teacher and school inspector who has written several books for teachers on using drama for learning.
Since retiring she has written two children’s novels: Red Snow and Angel’s Child.
She likes to involve children in the writing of her books as much as possible.
When she is not writing, she volunteers as a school governor and also enjoys playing tenor saxophone.
She now lives in Yorkshire. 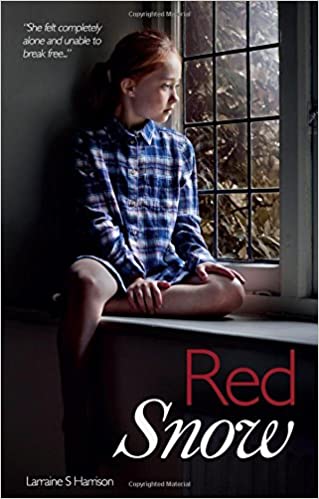 Twelve-year-old Megan though she knew everything there was to know about her mother’s death, but she was wrong.

Why will no one tell her what really happened and why has she become her father’s carer?

The boy next door has a dangerous secret that could help Megan, but will she be strong enough to pursue it to the end?

A story of danger, hope and perseverance.

Red Snow is atmospheric and leaps into action from the start as Megan Townsend tries to follow Ryan from next door into the woods as it would appear he has developed an interesting routine of being out each night. The curiosity of a twelve-year-old girl comes across well, because who isn’t a bit curious when someone has perceived peculiar habits when you’re a child. The story then turns more mysterious and sinister as there’s a trail of blood and possibly a big cat in the woods. It certainly would grab any child’s attention, especially those who are 8 or 9 years old plus.

The contrast between leisurely pursuits such as swimming, the sinister woods and Megan’s desire to find out about her mother works really well. Irene is an interesting character with her closely held secrets. The book becomes even more intriguing and really holds its own when Megan becomes more inquisitive about the death of her mother.

The emotions displayed by Paul – Megan’s dad and Megan herself are exquisitely portrayed. This entire book seems so natural about how each character’s personality and emotions are portrayed. It adds to this book being a really good read for children. The context, the language used and the pace makes it a book that children will be able to get into.

There are big, important themes like life and death, loneliness and being a carer, being strong, but all sensitively written and all at a child’s level of understanding and all wrapped in a fantastic story that will capture children, because, who doesn’t want to know what happened to Megan’s mum. Megan, especially is also a very likeable character. She is certainly a strong, determined girl, but also has a niceness about her. Children will be able to relate easily to this story, whether it is something they themselves have experienced in full or in-part or not as there is plenty to empathise with.

The changes in pace works well and the length means children can have a good chance of getting into it, without it being overwhelming in size (153 pages). The cover is curious. It makes you wonder what Megan is looking out of the window at and also draws you closer to her somehow. This is very much a children’s book in the way it is written and would sit very well in the children’s sections of libraries and bookshops.

The end will leave readers feeling very satisfied as the answers to the questions become apparent and there is hope.

I just had an instinctive feeling that it was going to be a good one and I was not disappointed and I am sure many readers will enjoy this book too.

*Please note that views are my own and are also unbiased.