This is a delightful sequel to The Bobby Girls. I’ve been looking forward to re-joining the volunteer policewomen and I am so pleased that I have the opportunity to and to review this excellently written and researched book that has wonderful characters and plot. 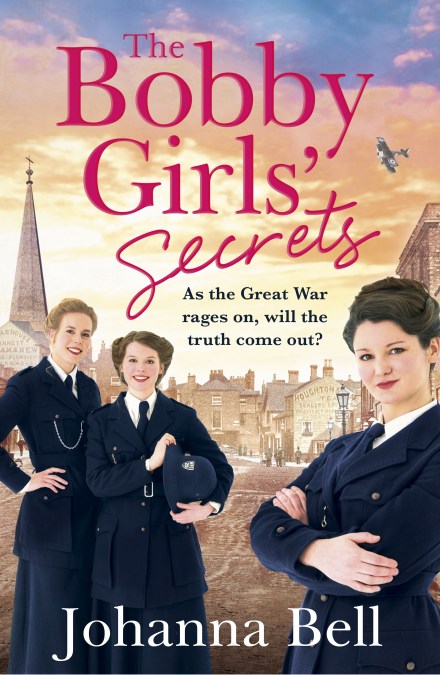 As the Great War rages on, will the truth come out?

1915. Best friends Irene, Maggie and Annie are proud members of the newly renamed Women’s Police Service. While Britain’s men are away fighting in France, the girls are doing their bit by keeping the peace at home in London’s East End.

But out of the blue, Irene is given the opportunity to be stationed near an army barracks in Grantham, Lincolnshire. Having recently experienced some heartbreak and keen for the adventure, she decides to go. What could possibly go wrong?

It turns out, plenty. One of the other WPS girls takes an immediate dislike to her and makes her life a misery. On top of that, the man she thinks could be the answer to all her problems isn’t all he seems. And when she finds a psychologically disturbed deserter in hiding, she has a very difficult decision to make . . .

Can Irene overcome all these obstacles without Maggie and Annie by her side, and find true happiness at last?

As soon a I read The Bobby Girls, I wanted to read The Bobby Girl’s Secrets. I must say I was not disappointed. After the first one, I just knew that the second one would be worth the wait. This set of girls have captured me and this is turning out to be one enthralling series, with very likeable characters and highly believable plots. This is down to the research that Johanna Bell has put in, and clearly she has a love of this time period. I love too, that even though there’s a lot going on in the women’s personal and work lives, there are strong bonds of friendship, something perhaps people can carry through into their own lives during and after challenging times.

We re-join Irene, Maggie and Annie in 1915 on Bethnal Green. The three women, in their 20s, who made it to join the Women Police Service (WPS) are now firm friends, despite such different backgrounds and having little in common. There is a great camaraderie about them as they look out for each other. Johanna Bell, ensures you really get to know these likeable characters and their personal lives, as well as their working ones and she does it in a way that you want to be involved with them. There’s heartache and hard-hitting issues, and yet it’s a lovely relaxed pace. The book deals with prostitution (nothing explicit), the consequences that war is having on the men and life in-between, such as how hard it is to deal with losing someone you have feelings for and yet not necessarily reciprocated.

Readers will travel to Grantham to see what new challenges are posed and there are some new characters to meet, such as, Mary, Ruby, Helen and Chief Inspector Boldwood. The issues of status are nicely shown and the differences in attitudes and acceptance of policemen and those who are women on the volunteer team, not to mention some tensions between those in Grantham and a Londoner who had an easier time than them. There’s the trials of things being different in London and the countryside. There’s also tensions between stall holders and soldiers, with the merchants giving the men a hard time. There’s also challenges of getting used to the imposed curfews,due to prostitution. It is interesting to read about the different attitudes and opinions on it, from the volunteer women’s police service point of view. It isn’t all work however as romance is in the air, but all is not all as it seems.

The book is very well researched and is very interesting about different attitudes of the time. Although there is less of the characters (apart from Irene) in the first book, this is still a very good read as Irene carries the story forward and it is interesting meeting new characters in a new location. I feel it also gives a wider perspective of what was happening at that time.

Just like in The Bobby Girls, there is a really interesting part in the last pages of the book, after the story has finished and after the acknowledgements, there are some brilliant photos of Grantham and the people depicted within this book.

You can Pre-Order now from bookshops (lots are open for business online, including independent bookshops) and Amazon. The published date is May 2020.

Look out for the third book in this delightful series – Christmas With The Bobby Girls.