What’s Left of Me is Yours
By Stephanie Scott
Rated: 4 Stars ****

This is a blog tour I was particularly interested in joining because it is a fictional piece, absolutely based on fact, on a newspaper article seen in the Times in 2010. It’s a story with a humanity about it, but is also a wonderfully presented psychological as it builds up the picture of what happened to Rina. With thanks to Anne Cater for inviting me onto her blog tour, and for the publisher for supplying a print/physical copy of this book, that I must say, has a beautiful, elegant cover that draws the eye in.
So today I present my review of the newly published book What’s Left of Me is Yours by Stephanie Scott. Please also find below, a short piece, that goes further into what inspired her to write this story. I’ve given it 4 stars, but it is so close to being 5 for me in my opinion. 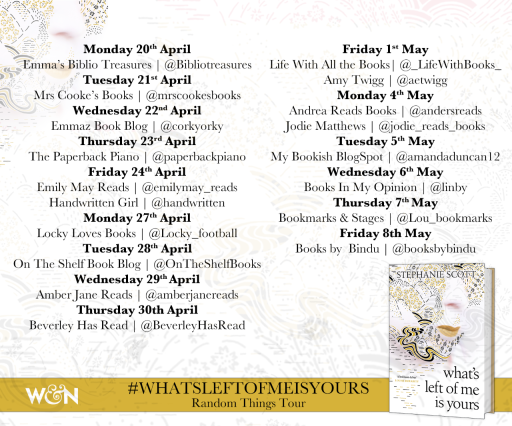 stephanie scott is a Singaporean-British writer who was born and raised in South East Asia. She read English Literature at the Universities of York and Cambridge and holds an M.St in Creative Writing from Oxford University.
She was awarded a British Association of Japanese Studies Toshiba Studentship for her anthropological work on WHAT’S LEFT OF ME IS YOURS and has been made a member of the British Japanese Law Association as a result of her research.
She has won the A.M. Heath Prize, the Jerwood Arvon Prize for Prose Fiction, and runner up in the Bridport Prize Peggy Chapman-Andrews First Novel Award for an early draft of the manuscript.

A gripping debut set in the Japanese marriage break-up industry and inspired by a true crime, from award-winning debut novelist Stephanie Scott.
Within the Tokyo underworld there is an industry which exists to break up marriages. It is known today as wakaresaseya – agents who, for a fee, can be hired by one spouse to seduce the other and provide grounds for divorce on favourable terms.
When Satō hires Kaitarō, a wakaresaseya agent, to have an affair with his wife, Rina, he assumes it will be an easy case. But Satō has never truly understood Rina or her desires and Kaitarō’s job is to do exactly that–until he does it too well. While Rina remains ignorant of the circumstances that brought them together, she and Kaitarō fall in a desperate, singular love, setting in motion a series of violent acts that will forever haunt her daughter’s life.
As Rina’s daughter, Sumiko, fills in the gaps of her mother’s story and her own memory, Scott probes the thorny psychological and moral grounds of the actions we take in the name of love, asking where we draw the line between passion and possession.

“A Beautiful Debut” says Louise Doughty on the cover (author of the very successful Apple Tree Yard and other novels). 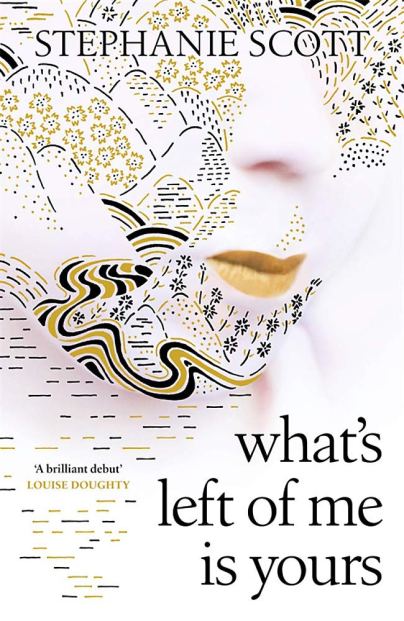 Firstly, let’s start with that cover, so beautiful, so full of curiosities and elegant. This book is eloquently written as it takes readers into the landscape of Japan and sensitively forms a story that inspired by reality, but is a work of fiction.

This a psychological that asks just where is the line drawn between healthy love and unhealthy possession. It shows the blurring of those lines through a few points of views and how this can lead up to such tragic consequences. It’s also a story of an actual, shocking industry that exists to break up marriages. It’s quite a hidden underworld I had no knowledge of, until I read this. The book sometimes also reads like it could be real with police incident reports also included, throughout as the story unfolds. I feel they play an important part to the narrative.

Kaitaro wants Rina (Sarashima’s mother) to return to photography and even buys her an expensive camera and already, near the beginning you can see a little bit of tension. Then readers will meet Shamiko, entering a legal career at the bar in Tokyo.
This is essentially a book in search of truth. The truth of what happened to Ms Sarashima’s mother and her determination to seek it as she speaks to people who may have worked on the original case within the justice system in the courthouse.

Some of what occurs is especially chilling within this mysterious story, that looks like has been well researched as it shows off some, perhaps lesser known parts of Japanese culture.

The book is a rich tapestry as it shows through a few characters eyes what happened. Within that, it also shows Rina’s life first hand and how she met Kaitaro and the seeming, romance of it all and how she sadly met her demise.

There is mostly a satisfying enough conclusion as facts are discovered and lives move onwards. It is definitely one I am pleased is at least as interesting and good as I had hoped. It was a book that had a premise that captured my attention as soon as I had heard about it and on the whole, it held my attention. All in all, this is a very good debut novel, that is worth investing time in.

‘In 2010 I read an article in The Times on a murder case in Tokyo where a marriage break-up agent had strangled his lover when she discovered his true profession and threatened to leave him. The agent was arrested at the scene and swiftly confessed, but as he was speaking to police detectives he said “I loved her. I love her still.” And it was this, the humanity of the original story which drew me. The agent claimed that he had felt trapped by all the lies he had told his target over the course of their relationship, but that he had truly come to love her, that he could not live without her. I was just newly married at the time and I wondered if what he had said was true – could you truly love someone and kill them?’