Write up of Criminal Masterminds
At Bloody Scotland Online

This was a talk with Lawrence Block in Manhatten, New York and Ian Rankin in Edinburgh. It was informative with some poignancy about their careers, and above all, very entertaining and the atmosphere created, even online, was excellent. 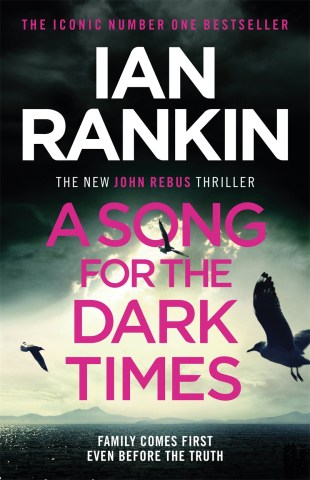 It was interesting to hear this as it is so honest: Lawrence admitted he couldn’t remember his books precisely. His first story was written in 1957 and sold to a magazine. He knew he was going to be writer and decided this at 15 and was doing it a couple of years later. He hadn’t set-out to write crime fiction. He just wanted to write something that someone would be pleased with. Over time he evolved into writing crime fiction.

Ian Rankin asked what he wrote early on.
Lawrence said he would like to write Science Fiction, he wrote a couple that didn’t get published. He talked about not having the mindset really for this genre.

Early on he read some crime fiction and then more general fiction. He thought about writing great literary fiction and wanted to write an outstanding book.
He talked about William Campbell Galls, with affection.

Ian Rankin and Lawrence Block discussed that sometimes writers copy other writing styles and modes until own voices are found. Ian admitted to copying Lawrence and seemed to really admire his work.
Lawrence said that Jazz writers did that a bit and how he writes from some influences.
It’s interesting that he hadn’t realised that Baloo was going to be such a big part of his books and Ian had the same with Cafferty, who had a small part to begin with and then featured more with Rebus. It was fascinating that he left him out in one book, to please someone who had reviewed, who didn’t like him, but didn’t enjoy the process as much, by keeping him out.

The talk moved onto the Scudders series. An angst-ridden, ex-cop – Scudders has a lot of baggage – his marriage is down and out and he’s left the police force. At the time, it wasn’t too hard to get into his state of mind as Lawrence had split from his wife.

His character was a window to the world and at an unspecified age, but something happened that he had to evolutionise, but there was no reason to be specific with age. He has however written about evolution of ageing in his 12th book, so therefore he had to give an age.
The humour in the talk about age is great!

A Time to Scatter Stones was published in 2019 and it could be the last Scudder book, but then he thought the one before might have been the last.
Ian Rankin asked if he was tempted to go back in time, but Lawrence had done it a couple of times but didn’t want to do it again.

Lawrence Block and Ian Rankin discussed the films with big named actors like Liam Neeson, Whoopi Goldberg and more… but it was so fascinating hearing their views on the films and about contracts, which seem complex.

Ian Rankin talked of the Burglar books, that are about a cat burglar by night, an antiquarian bookshop by day. Ian Rankin talked about them having humour within them. It was interesting hearing Lawrence talk so candidly about not having a job and had self-esteem issues and all the jobs that have those words – experience required in the ads. It then occurred to him that he shouldn’t rule out crime and became quite inspired. His anecdotes were really entertaining as he thought about it all, only entertaining because he didn’t actually go into burgulary and decided to write a book instead.

They discussed being in lockdown and Lawrence thought he would write all the time, but he didn’t and doesn’t seem concerned about that.

Dead Girl Blues wasn’t a book he expected to write and thought it would be a short story and ended up being a short novel. He says he likes it enough

Ian Rankin was an early reader of the book and said he went self-publishing. He said it was going to be a problematic book to get published and his agent was industrious in submitting it to the best publishing houses and a lot liked it, but they didn’t see it as something that could be published profitably. After a couple of offers, he decided to self-publish. It wasn’t a book he expected to finish and so he wanted to publish it how he wanted it.
Ian Rankin talked about it being very dark, but there is a small light and said there is a very moral theme and says it is a book that is thought-provoking. It has got a lot of favourable reviews.

It was so poignant about how Lawrence Block may be coming to the end of his writing career and as Scudder comes to the end of his. Ian Rankin is at a different stage in writing career.
They talked about travel and Lawrence seems like he was quite the explorer and yet, now seems different. He enjoy cruises and train travel. Ian Rankin talked about taking The Blue Train in Africa. Neither of them sound in any hurry to actually travel at the moment, due to the virus of course.

The Darkling Halls of Ivy is edited by Lawrence Block. Ian Rankin has a story in this anthology, set in Edinburgh. Lawrence enjoys doing the anthology and is doing one now.

Ian Rankin said he enjoys writing short stories and he likes a set of rules that come with it, such as a setting or a time of year.
Ian Rankin tried to enthuse Lawrence into writing more short stories to reinvogorate him.

Ian Rankin asked a question that covered settings and NYC. Lawrence Block said what he likes about Manhatten is familiarity and has lived there a long time and knows a few people there. He finds the energy of the city extraordinary. He talked about leaving NYC for Florida in 1985 at that time for awhile, but still set books in NYC.

Ian Rankin, when he lived in France thought he would go off and set his books there, but found he still wanted to set his books in Edinburgh.

It was fascinating hearing Ian Rankin talking about how he has writing heroes who he wished had books signed by.