The Greatest Beer Run Ever – A Crazy Adventure In A Crazy War
by John “Chick” Donohue
Soon to be a Major Movie
Rated: 5 stars *****

Adventure like no other! The Greatest Beer Run Ever – A Crazy Adventure In A Crazy War is an enthralling page-turner that greatly enhances any knowledge of Vietnam and is highly unique! This is an adventure that has not been told before until now, in what is a fascinating book!

Thanks to Anne Cater at Random Things Tours for inviting me to review and of course Monoray for sending a hardback copy of the book, that will soon be a major movie.

THE GREATEST BEER RUN EVER: A Crazy Adventure in a Crazy War is the amazing
true story of a young man going to take his buddies a few cans of beer – in the heat of
the Vietnam war. In 1967 – having seen students protesting against the Vietnam war, some
New York City bar friends decided that someone should hop over to Vietnam to buy their
various neighbourhood army buddies a beer, to show them that SOMEONE appreciates
what they’re doing over there. One man was up for the challenge: John “Chickie” Donohue.
A U. S. Marine Corps veteran turned merchant mariner, Chickie decided he wasn’t about
to desert his buddies on the front lines when they needed him most.
Chickie set off on an adventure that changed his life forever. Armed with Irish luck and
a backpack full of alcohol, he made his way to Qui Nho’n, tracking down his disbelieving
friends one by one. But Chickie saw more of the war than he ever bargained for…

SOON TO BE A MAJOR MOVIE
Peter Farrelly, writer and producer of Green Book, is turning THE GREATEST BEER
RUN EVER into a movie, currently slated for Autumn 2020 (TBC). In 2018 Green Book
won the Golden Globe for Best Screenplay and the Oscar for Best Picture, Best Original
Screenplay, and Best Supporting Actor. Farrelly has also directed and produced Dumb
and Dumber, Shallow Hal, Me, Myself and Irene, There’s Something About Mary, and the
2007 remake of The Heartbreak Kid. 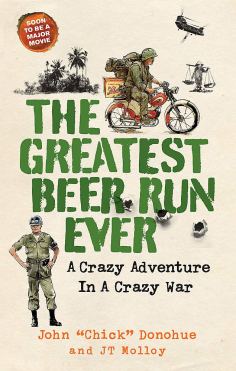 John “Chick” Donahue, was, at 26 years of age, a US Marine Corps veteran working as a merchant seaman, when challenged to do something, whilst in a bar – The Hedgehog Inn in NYC. A tradition brought about from ancestry from Scotland, England, Ireland and Wales. It’s more serious than any old joke about An Englishman, A Scotsman, An Irishman walked into a bar…. These men had known death of family and friends in the Vietnam War, as if that wasn’t enough, they had to deal with protestors, which were more than just frustrating to John. This is when the most fantastical challenge was brewed up, to track down their comrades in Vietnam and give them beer, hugs, support etc. It almost sounds unbelievable, but this actually did happen.

Turns out John also knew Frank McCourt from Angela’s Ashes fame. I should think many people still remember this book and will find what he has to say about an incident, highly interesting.

The book moves onto showing a bit about the political scene and also, more interesting, the thoughts that went through the men’s minds when they saw people protesting about the war and their comrades just going about their duty in Vietnam; whatever you think about the war itself, this becomes thought-provoking and very, very “human” and is told well, from this point of view. It’s almost looking a bit behind the scenes as it were as it delves deeper than the surface and it is an enthralling read. No matter how much you know about the Vietnam War, this will add to readers knowledge and show a whole different uniqueness.

What started as an almost flippant comment about taking beer to Vietnam becomes real, the support for it to happen is phenominal and the adventure, something, as crazy as it sounds, nothing short of inspiring! It’s such a treat of a book of a little known event, that now can reach wider audiences and has even inspired a film company to turn it into a movie is nothing short of miraculous and is a good find! It takes people from NYC to Qui Nhon, Vietnam to their fellow comrades, with beer in their arms and Irish songs in their voices. There is a fascinating insight into what was happening in Vietnam during the war and the GI’s and the weaponary and the danger John “Chick” Donahue was around as he witnesses POWs. There is a great feel of the time that he was there at a perspective  that, perhaps, unless you were there, wouldn’t otherwise have known about. There is all emotions mixed with fascination and even in a war ravaged place, there can be kindnesses. Although, ultimately there is sadness as there always will be in war, but there are pockets that are astonishing with people being kind to each other. It uplifts it all a bit and amazingly is not at all a heavy read. It is somewhat a page-turner, leading to a poignant end.

There are fabulous photos throughout the book, which feels so poignant and brings about a heightened emotion and in a sense, some certain respect and adds a real richness and further understanding of this period of time.

Is it worth the hype and no doubt the hype it will get when the movie is made? Absolutely! It’s so unique and yes it’s sad about the Vietnam war, but out of this is terrific beyond the call of duty type friendship, comradeship, kindness and care. This book brings a whole different light onto a period of time that is mostly noted for it being so tragic.

John “Chickie” Donohue joined the United States Marine Corps at the age of
seventeen and spent several years as a Merchant Mariner after his discharge. His
work took him to numerous foreign ports, including Saigon during the Vietnam War.
After the war, he became a Sandhog, or tunnel builder, and eventually became the
Legislative and Political Director of Sandhogs, Local 147, Laborers International Union
of North America, a post in which he served for over three decades. Donohue is a
graduate of the Harvard University John F. Kennedy School of Government where he
received his Master of Public Administration degree. He is happily married to Theresa
“Terri” O’Neil and spends his time between New York, Florida, and West Cork, Ireland. 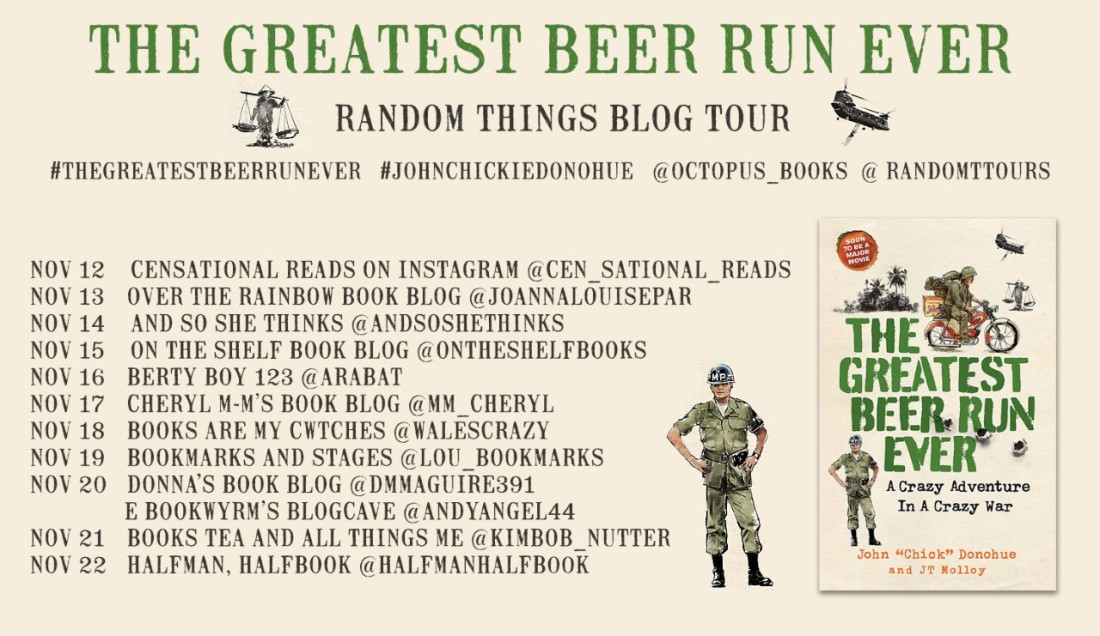 2 thoughts on “The Greatest Beer Run Ever – A Crazy Adventure In A Crazy War – Soon to be a Movie by John “Chick” Donohue and J.T. Molloy #GreatestBeerRun #JohnChickieDonohue @Octopus_Books @RandomTTours #NonFiction #NonFictionNovember”