Lunch has it all. It has food and friendship, so many aspects of life between 2 characters who lead different lives and come together once a month. It has a large helping of the most wonderful humour and warmth. It also has family life, employment life, romance. It also shows that whatever you do, whatever your views, you can still be friends. It has so much that would be relatable to so many people. This is one sitcom I’ve listened to a number of times, it is that good!
I finally had a bit of time to spontaneously write a review. Also check out the link I’ve added from BBC Good Food and also the Audible Link  to the sitcom itself in the review.

Find out more in the blurb and my review.

Bill works as an economist in a right-wing institute giving succour to bankers and businessmen. Bella teaches yoga, waters the plants in Canary Wharf and holds Proust seminars for retirees. Years ago they shared a flat before Bill got married and moved to America. Now he’s back and feeling a little off-kilter, so he decides to rekindle his friendship with Bella.

Once a month they get together for lunch, where they talk about everything from politics to Proust, parenting and the perils of online dating. The only thing they never discuss is how much they love each other….

In Marcy Kahan’s delightful “platonic romantic comedy”, we join Bill and Bella as they meet, eat and disagree about everything; and over the course of four series, we learn their hopes and dreams and listen in as their lives change direction.

I first came across Lunch on BBC Radio 4 a few years ago. It is so easy and such fun to listen to, that I’ve listened to it quite a number of times. It’s one of the most fabulously entertaining and humorous two-hander plays from BBC Radio 4 and now can be found on Audible, that is still as important then as it is now, in such divisions of countries, including the UK. It also features wonderful food as Bill (Stephen Mangan) and Bella (Claire Skinner) meet once a month in cafes as you hear their lives play out. Expect lots of mentions of glorious food from pho-ga (Vietnamese chicken soup) to eggs to salad and more… Just below is a link to a recipe that I use to make pho-ga at home. It sounds more complex than it is and is heartwarming, aromatic deliciousness. I think so anyway. I got inspired to try it out when listening to the play…

This play is so important for our times. It shows how two people who have very different jobs, lives and opposing political views can still civily meet-up for lunch and talk about life, work, family, loves and generally have a nice time. It’s a pretty spectacular message and one of unity. This is a essentially a comedy and is really rather funny as Bill (Stephen Mangan) and Bella (Claire Skinner) get to a point of where they just aren’t admitting their feelings for each other. It also cleverly weaves wit into their differing views. There is also the coming together to help each other out by listening to each other and giving advice to even Bill trying out a bit of roleplay with Bella to practice for an interview on Newsnight. There is much wit when Bill asks what Bella is looking for out of no less than 3 lovers who she meets. The way some of the lines are said (as throughout), are pure fun! This shows what brilliant actors Stephen Mangan and Claire Skinner are. They bring Marcy Kahan’s intuitive and witty script-writing to life in such a believable way.

Both characters are easy to like and care about what happens to them. It is one of the most uplifting radio plays and one that has an important point to say, that it doesn’t matter what side of the fence you are on for jobs or politics, you can still be friends and you may even become lovers. There’s a sense of unity amongst that so-called dividing line, and that’s what makes this glorious, as well as the laugh out loud humour. There is a lot to smile about in this audio play. 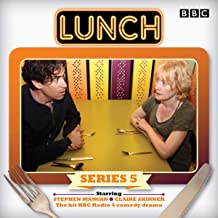