What Beauty There Is
By Cory Anderson

Today I have a dark thriller for young adults/older teenagers that has characters to root for twists and turns that grip on the backdrop of a harsh environment.

I thank The Write Reads for inviting me to review and for Penguin for gifting me a copy of the book.

Read further for the blurb and full review of the book. 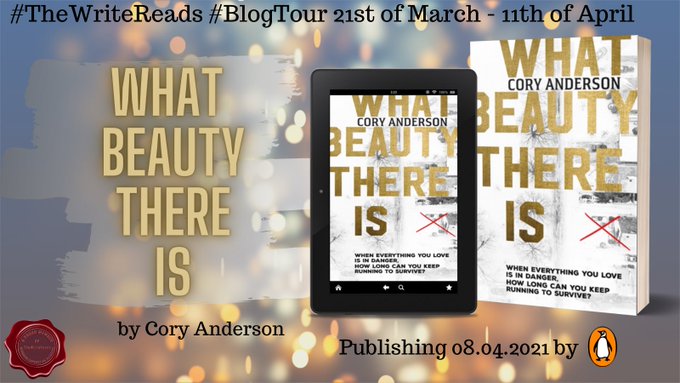 Winter. The sky is dark. It is cold enough to crack bones.

Jack Morton has nothing left. Except for his younger brother, Matty, who he’d do anything for. Even die for. Now with their mother gone, and their funds quickly dwindling, Jack needs to make a choice: lose his brother to foster care, or find the drug money that sent his father to prison. He chooses the money.

Ava Bardem lives in isolation, a life of silence. For seventeen years her father has controlled her fate. He has taught her to love no one. Trust no one. Now Victor Bardem is stalking the same money as Jack. When he picks up Jack’s trail, Ava must make her own wrenching choice: remain silent or help the brothers survive.

Choices. They come at a price.

Set to be a big thriller for YA/teenage readers, What Beauty Is, is dark and full of twists that would capture and engage older teens. It’s subject matters of loss and hard times growing up are stark. Jack’s mother had committed suicide when he was younger and his father is in prison. This book shows his and Atlas’s resilience.Later Jack meets Ava, who is another main character and she too has had a hard life, witnessing her mother having to leave the family home and Barden being central to this.

There’s also drugs involved as that’s why their father is in prison, and the money has to be found. There is also a real concern as social care services are contacted and Jack is worried about being separated from his brother and put into foster care. There’s quite an intensity to the book that is sure to grip and readers may well be rooting for the young characters as they try and find their way through their tough upbringing, with the hope they can and will survive. It shows cause and effect of this type of life and the emotions and how the teens react to it all.

So, as you can see, there’s a lot going on, much of which will grip the teenage population and have them talking as the subject matters are huge and also not unknown by them. It is also written in a way that makes it entirely suitable for teens, there isn’t anything that is too adult within them, it is written well with them in mind and is sure to engage.