Foolish Heroines is a fictional book that brings a tapestry of humour and quirky characters. Discover more in the blurb and my review below. Thanks to Valley Press for gifting the book in-which I have reviewed from and Isabelle Kenyon for inviting me onto the blog tour.

Janina Reston is a language expert, translating fiendishly tricky Arabic and Asian mathematical and scientific texts. Words are her world. But she can’t find any to share with her husband Owen. Instead, she confides in a spider named Gladys (who may or may not be her deceased grandmother).

She lives in an ordinary city suburb where extraordinary things happen. Lily’s husband dies in a strange accident with a milk bottle, while Fatima writes biographies of unknown people living seemingly inconsequential lives, and Zosia – whose most daring adventure thus far has been replacing jelly and ice cream with lemon meringue pie – runs off to Delhi with an Asian Women’s Sewing Group.

Written with zest, zeal and humour (powered by numerous biscuits and, on a good day, cake), June Wentland’s debut novel is a surreal journey through the avenues and alleyways of everyday life. But forget dull domesticity. This is a suburb where dense jungle leaves creep through the patio door when you’re putting the kettle on, where porcelain shepherdesses have evil intent, and where a seven-legged arachnid can be a wise companion for a woman at the end of her tether.

Right from the first paragraph, it becomes clear that this is not going to be any ordinary story. It has quite an opener!! I won’t say what that entails as it would spoil it for you, but put it this way, Janina, who is one of the main characters has a strange sub-conscious indeed. It makes for a quirky, humorous entertaining story. This is most definitely for people who perhaps want something a bit different to read. In a quirky sense, it’s a point of view and it’s thought-provoking in a comedic sense. The book is perhaps a bit like reading about people’s lives that are at quite a tangent from what may be considered average, with a just a few threads of the average still hanging on in there. To begin with it made me think of a sitcom and also a little bit like Shirley Valentine (when she talks to her wall), but those thoughts are soon swept away. This is a pretty original story. It most definitely delivers on that.

Janina has a couple of friends – Owen who is human and is real and a spider that, quite innocently, hangs around, not realising that Janina believes it’s a reincarnation. There are times when I feel sorry for Owen because the spider sometimes trumps him in the conversation stakes. There could also be a ghost in her toilet, creating a blockage…

Then there’s Fatima, who lives in the block of flats, writing biographies and readers meet her when she is writing about Lily, who was married to Ernest, who had the strangest death, which brings even more humour along with mathematical analogies that I certainly hadn’t thought of in such light, as this book brings. Lily is an interesting character in her own-right too, with her, perhaps, a bit subversive and spirtual in life. Zosia is also certainly an intriguing character whose life is changing as she does more adventuring than she ever imagined.

By the end, the title “Foolish Heroines” has been explained in this tapestry of quirky lives that bring intrigue and humour.

June Wentland was born in Hull and currently lives in Corsham, Wiltshire.

June has an M.A. in Creative Writing from Bath Spa University and has a day job being the Reader Development Officer for Bath and N.E Somerset Council Library Service.

Her fiction has been televised and published by BBC Television. She’s also written freelance for Endemol U.K. and has been an occasional guest lecturer for the Creative Industries degree at Southampton Solent University. 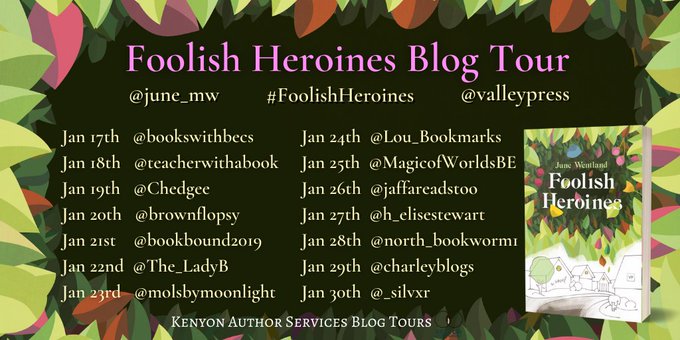