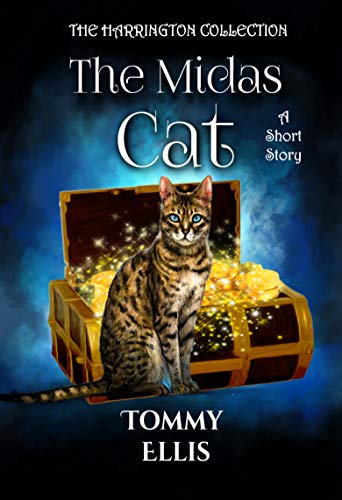 Tommy is an author and saxophonist. He’s played alongside Chas and Dave, Mud, The Troggs and Earth Wind and Fire, to name a few. He’s played in a nudist camp where he felt a tad over dressed and had to run away from a gun-toting audience member. He’s also had terrorists threaten to blow up two of his gigs! He is the author of The Midas Cat books; a series of surreal dark humour featuring an Adam Ant loving, talking feline that’s being tracked down by an unscrupulous banker. Think The Pink Panther as if re-imagined by Tim Burton. Available now: The Midas Cat: The Harrington Collection. A 3000-word short read. E book only. The Midas Cat: The Devil Wears Tabby: A 30,000-word novella available as an e book and paperback. The survival of Ralph’s marriage is dependent upon him capturing a hundred million dollar talking cat. Standing in his way, however, is the cat itself, Lord Lucan, an imaginary game show host, and a voodoo death spirit. Follow Ralph into insanity as the cat tears his life apart piece by piece.

Discover the insane world of the rarest and most valuable feline on earth: An auction, an Elvis automaton, a truck load of jewels and the midas cat!

Having enjoyed The Cat Wears Prada, I had high hopes for the next book. I wasn’t disappointed. It meets up with Ralph again, in a very sorry state of affairs for himself, after that book. Again, it is a brilliant quick story, of only a few pages and two chapters in length. It is a perfect, speedy story for adults, if you’ve little time on your hands and yet need some time to escape from the world for a bit.

There is a certain balance of humour and the somewhat downtrodden Ralph who is someone who readers can feel sympathy for, even though life is like no other, that I know anyway. There is an absurdity about it and yet that is exactly what makes for an amusing read. It’s also what makes for a most unusual cat that is worth following.

The story takes place at an auction house, with some collections that wouldn’t look out of place in the tv series Flog It and then there is the even more random. There is however The Harrington Collection, which has a very expensive pink diamond in it. The Midas Cat, that caused so many issues in the previous book (The Midas Cat Wears Prada), and who is worth a whole lot of money, is discovered now lurking around the auction house.
With references to Elvis, Postman Pat, When Harry Meets Sally and Peaky Blinders, this is a highly entertaining read.
I highly recommend it for the sheer fun of it all.
This can be found in e-book form and I am informed by the author, that it also may become an audiobook. So it could be worth also keeping an eye out for that in the future.

Today I took a look at the storytelling by author Andrew Leach. Over on Twitter he is doing around 20/25 tweets to create a story in 3 parts. If you missed today’s part 1, you can find the story on Twitter. It is called Maneki-Neko about two brothers, each of whom tells their part.

For a story on Twitter, it reads surprisingly well and is worth reading the next installments. It’s interesting and has some drama and atmosphere to it. The second part is around 1:30pm on Wednesday and the 3rd and final part being on Thursday around the same time. It’s worth checking out to see the story unfold and how something can seem pretty decent when a tweet only allows so many characters.

Follow for the next part and to check out part 1 via this link: Story by Andrew Leach

It is thanks to Andrew Leach for doing this, so innovately and to Janet, Clare and Carolyn for doing this festival of which it is a pleasure to blog about, when I can attend events.

Kevin Ansbro was born of Irish parents and has lived in Malaysia and Germany.

He was educated at Hamond’s Grammar School in Swaffham, and at the Norfolk College of Arts and Technology in King’s Lynn.

Kevin also has a background in karate and kickboxing and has travelled extensively – particularly in the Far East.

He is married to Julie, and currently lives in Norwich, England.

“Once the evening’s entertainment was over the Minotaur, as naked as Nature intended, clumped into Pablo Zapata’s bar…”

A baby with a passion for theoretical physics…

A stolen coin that releases a wish-granting genie…

And where else would you see Ginger Rogers learning the Ali shuffle, or a humble fisherman making friends with Poseidon?

Charlatans and shapeshifters, lovers and leprechauns, ghosts and office creeps are just some of the characters that Kevin Ansbro brings to life in this volume of short stories. His tales span the globe and range from the wickedly funny to the sad and deeply unnerving. With his perceptive take on human failings, his vivid imagination and his glorious grasp of language, Ansbro’s thought-provoking stories will stay with you long after you turn the final page. 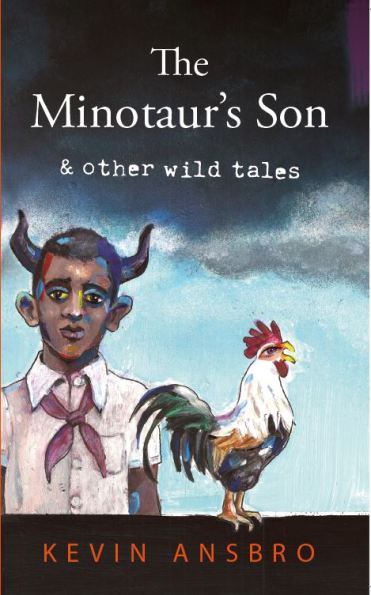 This is an excellent book to read all the way through and then later to dip in and out of. Kevin Ansbro takes readers on a journey through these “Wild Tales” from space to many countries on earth again. You will enter different ages from as far back as the Ancient Greeks to the days of the Raj, to war times to the present day. You will meet mermaids, Greek Gods, a talking cat and many other creatures and of course humans too, including the intrepid author of this book – Kevin Ansbro. You are in for a real treat. These are tales of humour, trepidation, emotion and have great twists. To write short stories is as skillful as writing a novel and Kevin does them well. There is something in there for all sorts of people. The construction of these short stories are very good, including the endings, which was very pleasing.
I recommend people give them a try. I certainly very much enjoyed the majority of them. There are stories that I am sure will suit most tastes as Kevin Ansbro has skillfully covered all  genres.

Below I have written a little bit about most of the short stories, leaving some for readers to also discover too.

First you’ll meet a mermaid, a talking cat and its owner – Jacob in Sirens. Then it is off to space to meet Captain Chuck Montana of the Galaxy Ship Orion in Chuck Montana and the 22 Century to learn what the Lurgians are. Back on earth there is a 60th birthday celebration, but things don’t exactly go as planned in Doth Thou Thinkest Me a Fool. There is also a story later on that returns to the space theme. It’s a thought-provoking story called Extinction. They are well-written and Sirens is a great way to start this book as it pulls and tugs the intrigue of this book a bit further.

You’ve got to Be Careful What You Wish For in Brighton when it comes to octogenarians – Horace and Ethel and a promise of 3 wishes that will be granted. All is mysterious and just might give them exactly what they want, but there’s a twist in this cautionary tale.

Cache en Pleine Vue or in English – Hiding in Plain Sight in the little French hamlet of Culbiso holds gossip and secrets. Madam Pettier harbours the greatest secret of all as she isn’t exactly what you would expect.

Well, what can I say, except, it’s a Fait Accompli when readers meet Charles Remington and Veronica Meyer. Everything seems like it could be too good to be true.

In The Minotaur’s Son, you meet the mythical creatures and it comes with a warning, not to take things for granted. You certainly wouldn’t want to mess with strong female, Isadora.

The Show Off really made me smile. It features Kevin Ansbro, the author of this book. Quite unusually so, for a book of this type. It has you willing him on to do well at the book talk and it has the happiest, most amazing of endings.

A Matter of Honour is set during the Crimean War and the aftermath is realised of how PTSD can really affect someone and a family. It is written sensitively, with a rawness but also, I felt with care and with such emotion that comes from a certain truth.

Meet Yara – a Maharaja’s Concubine in 1932 – the days of the Raj in The Concubine and the Postman She is nothing ordinary. There are lessons those men who are greedy could learn and beware of a curse. Read to find out about how a postman comes into this story and what happens. It may surprise you.

The Fable of the Fisherman’s Hat brings back Isadora with her husband Demetrius and also mermaids in the sea. It has adventure and trepidation and nothing will seem as it once did.

The Leech takes readers to Japan and the people creating prosperity for their economy. It isn’t just a story for Japan though, some of the themes of recognition for those who make a difference are world-wide and as a result, has thought-provoking qualities.

Dorothy in Oz is a different perspective on her re-telling her story. I enjoyed this because, of course, who would believe you when you tell people a scarecrow etc talked to you and you had to click your red heels 3 times to get home.

Meet a Leprechaun in Ireland (of course) in Pot of Gold. This has a human and ecological tale within it, which is incredibly relevant for today and especially in farming.

Waiting for Ryan is a bit of a love story between two different cultures – Ryan from England and Mishti originally from India. Set in present times, they meet in Thailand, just before the well-reported tsunami that occurred there. There’s enough of a hook to keep wanting to read to see if the couple will ever see each other again, especially since time moves on and Ryan also returns to England.

Pantheon is just incredibly funny. Who can this mysterious man be at Christmas time? Well, it is up to authors, a pop star, a soul singer, a dancer and a boxer to ponder.
Meet Dickens and Hemingway, Shakespeare, oh and Oscar Wilde gate crashing a conversation and then add David Bowie into the mix and Ginger Rodgers and Muhammad Ali, it makes for a surreal but hilarious tale.

With thanks to Kevin Ansbro for supplying me with an e-book copy of his book and for agreeing to me reviewing.