Hope In Liverpool
By T.N. Traynor

Emotionally charged with courage and hope is what Hope in Liverpool brings to readers eyes and imaginations. FInd out more in the blurb and review below. 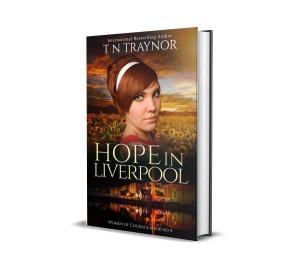 Can an alliance of convenience heal two broken hearts?

Liverpool, 1958. Hope Bennett longs to feel safe and wanted. Loyal to an alcoholic mother who gambles away all her hard-earned wages, she’s devastated by the announcement her family is moving and she’s not to follow. But her despondent plan to fling herself off the ferry and succumb to the freezing River Mersey is interrupted by a handsome older man.

John Walker expects to live out the rest of his days drowning in grief, isolated and lonely after the loss of his childhood sweetheart.  When he spots a young woman in distress he is immediately drawn to help her.

Can the fragile dream of a better life out of the slums provide the security and companionship they both crave?

Set in Liverpool 1958, Traynor has cut an emotional atmosphere for an involving family drama that unfolds. This could be an utterly depressing story, but Traynor has steered away from this just enough to make it hopeful instead.

Hope’s life is challenging to the max, from practically being abandoned and her mother being an alcoholic who fritters away her wages. Hope however shows courage and a certain amount of resilience through the bleakness and hardships. She also has a certain amount of courage as she allows some romance to enter her life, even though life still seems to have some fragilities within it, which, before romance, had an intention of suicide. This is written in sensitively and isn’t dwelled too much upon, but something some people may be able to relate to. By the end there is hope to be had and nicely shows that even through harrowing and bleak times there can be lightness. Readers can discover through the twists and turns of Hope’s life how that happens. 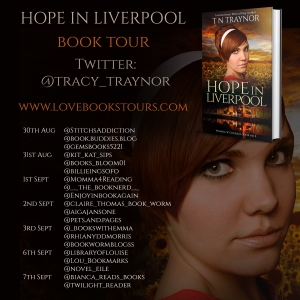