Freckles is a warm and well-observed book with interesting concepts.
Find out more in the blurb and the rest of my review below, as well as a bit about the author.
Firstly, thanks to Random T Tours for inviting me to the blog tour to review and to Harper Collins for this opportunity and for an e-book. 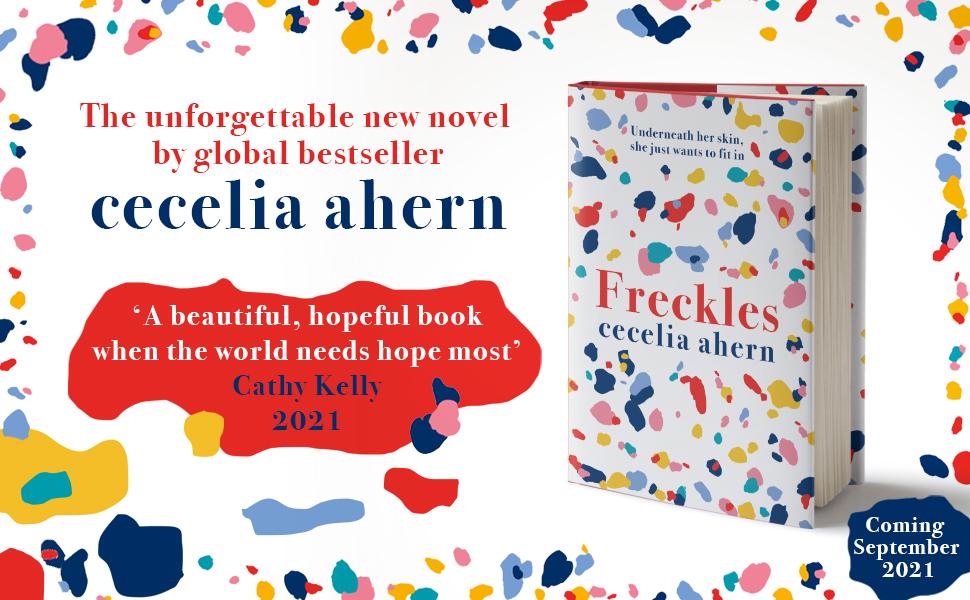 ‘Freckles is a beautiful, hopeful book when the world needs hope most. Cecelia has written a novel about our search for our authentic selves in a crazy world. Like all her novels, it’s inspiring, life-affirming and full of insight’ CATHY KELLY
You are the average of the five people you spend the most time with… When a stranger utters these words to Allegra Bird, nicknamed Freckles, it turns her highly ordered life upside down. In her current life as a parking warden, she has left her eccentric father and unconventional childhood behind for a bold new life in the city.
But a single encounter leads her to ask the question she’s been avoiding for so long: who are the people who made her the way she is? And who are the five people who can shape and determine her future?
Just as she once joined the freckles on her skin to mirror the constellations in the night sky, she must once again look for connections.
Told in Allegra’s vivid, original voice, moving from Dublin to the fierce Atlantic coast, this is an unforgettable story of human connection, of friendship, and growing into your own skin.
Five people. Five stars. Freckle to freckle. Star to star.

Freckles is a bit like 6 degrees of separation in some ways and an interesting concept to find connections. Allegra Bird is otherwise known as Freckles, who is by and large an interesting character and yet someone readers will be able to connect to. It begins with her connecting her own actual freckles in different, creative ways and gets her thinking about life connections and how it can shape a person. It’s a though-provoking concept and one that makes you think about who are the 5 people you are most connected in life and in what ways they play a part in making you who you are as she tells you that you are the average of 5 people.

Freckles is a “plan A” type of person and has grit and determination to stick with it, no “plan B”, until the first plan doesn’t work and she ends up being a parking warden with Fingal County Council, so she’s not totally inflexible and it’s close to her desires. She’s an enjoyable character to discover more about, as is where she is based – Malahide, a real place, near Dublin, with its beautiful scenery, which Cecelia Ahern presents so well and truly paints a picture of there and Valentia.

Freckles tells her story in the first person and of the people she meets and the routines she has, such as the bakery she goes to and who serves her. The writing is so accomplished and is so well thought out that it is almost like you are following Freckles around her lifestyle. From the start you’re pulled into her life in the present and also get a peek into her past, when she was at boarding school. The past, especially is written in such a way that you could be sitting next to Freckles having a wonderfully fascinating conversation.

Readers will meet Becky and Donnacha, who she babysits for;  Pops, who loves music; Paddy who is a work colleague; a person who is a Great Dane Walker and Spanner who is a baker, each with interesting lives, some also with secrets. There’s friendship and human connectivity at the heart of this story, how people’s paths cross, how some become part of routines, yet not taken for granted. It also tells a story about how lives aren’t always rosy. Freckles however seems a positive and friendly person to get to know and it is fascinating to see who outwith her family at each stage of her life had some influence in her character building. It’s a book that may make you do some introspection too as Freckles leads you down the path of self-discovery and also having the desire, even if it seems impossible to write letters to certain people, which certainly brings a different slant to things, with some added warmth and humour.

Freckles is a heartwarming and entertaining book to explore and by then discover who connects to who and how they all connect back to Freckles.

Cecelia Ahern is one of the biggest selling authors to emerge in the past fifteen years, having sold more than 25 million copies worldwide in over 50 countries.
Two of her books have been adapted as major films and she has created several TV series in the US and Germany. Her novel PS I Love You was a New York Times bestseller and huge #1 bestseller in Ireland and the UK. In 2007, it was made into a major film starring Hilary Swank and Gerard Butler and most recently,
Cecelia wrote the sequel- Postscript which was an instant bestseller.

Cecelia has written 13 bestselling novels including two YA novels and a critically acclaimed collection of short stories, ROAR which is being produced by and starring Nicole Kidman. Her novels have resonated with readers everywhere through their thoughtful, unique and inspiring storytelling and have won numerous awards.
Cecelia lives in Dublin with her family. To find out more please visit http://www.cecelia-ahern.com