Thick and Thin
By Upasa Borah

Older young adults/teens and 20 somethings will discover characters in Raumah who have issues to overcome and there is also some lust and a lot of fists flying and other elements of action with family ties, romance and discovery. Find out more in the blurb and review.
Thanks to Cherry Publishing for gifting me the book to review 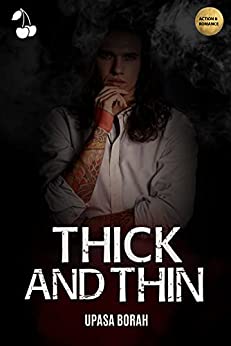 In Raumah, a city where wealth and familial ties rule all, the four Kings of Raumah walk a path seemingly paved in gold.
Duante, the protector. Strong, amiable and desperate to keep his loved ones out of harm’s way.
Drayden, the golden boy. Smart and resourceful, heir to the country’s largest and most influential business empire.
Shohei, the celebrity. Delicate but determined, this fabulous fashion icon is the darling of Raumah.
Aqil, the prodigy. Truly gifted and academically dominant, but is it earned or is it his family ties that are the key to his successes?

Everything on the surface seems picture perfect, but dark secrets lie hidden behind the
frame. When Duante’s past comes calling, the Kings’ world is thrown into chaos.
Faced with the ghosts of his bloody past, Duante’s hard-earned freedom is put in jeopardy, just as Shohei’s love is put to the test. Drayden’s ruthless determination is usually his strength, but this time, will it blind him to what’s right? Can Aqil, the trailblazing son of the Faiz family, face his fears, before the fire burns him alive?
Facing their fears is no easy task, will they bow under the pressure or come out stronger than ever?

Thick and Thin gets off to a strong start. There’s Duante, the protector, Drayden, the golden boy and heir to the country’s largest and most influential business empire and Shohei, the celebrity who is a fashion icon. It’s identifiable to Young Adults. Loki also pops up.

The chapters present themselves as Acts, which adds some intrigue as does the four kings and the characters surrounding them. That makes it sound almost fantastical, but really there are  just some average lives too, with pop culture and bookish references, such as Justin Timberlake and Harry Potter. It also has powerful messages about bullies and handling them.

The book is about identity and trying to accept who you are and makes me hopeful that people will become happy in their own skin. There’s also friendships embraced and characters like Aquil who just want to be included in plans. This is so relatable for the Young Adult audience with its powerful themes.
It also delves into darker sides of society, such as gun culture. I think there is a lot that young adults will find thought-provoking and some they may debate.
There is also part where Aquil has got powerful family ties who are influential, for readers to see if Aquil is working on own steam or if the family has a hand in things, such as a scholarship reward.

There is the occassional bit of humour of the teenage/young adult life. There is also a lot of that teenage angst, as well as a film of sadness going across it.

There is teenage lust amongst a couple of the characters, who pine after each other at certain points and some elements of self-discovery and mostly it is done well.

As much as it isn’t quite the page-turner, it is something that young adults can get their teeth into and to see who comes out of it all well. This would be good for older teens and 20 somethings.

Upasa Borah (also known by her pen name glassEyed) is a 21 year old dreamer from a land of rivers and hills, called Assam, in India. Aside from writing stories, she dabbles in poetry and performance art. She is a spoken word poet who has been active in the slam poetry circuit in Delhi, as well as in her hometown, as a
featured performer, organiser and judge. A believer of magic and collector of stories, she loves
meeting new people and finding inspiration and muses in the mundane.

Will Young broke into mass public consiousness on Pop Idol. Since then I have seen his blossoming career in, not just pop music, but on stage in many shows like Cabaret, Strictly Ballroom and more and in films like Mrs Henderson Presents. where he also shines and in some pretty brave and frank interviews. He’s taken this braveness to a whole new level and gone much further and delved much more into the his inner feelings on life. Whether you are within the LGBTQ community, which is of course the primary reach of this book to raise awareness of mental health, or not, this is inspiring, informative and there is something that anyone can grasp onto and take away with them.
He also has a new album out called – Lexicon.

Thank you to Penguin Random House and E-bury Publishing publicists for accepting my request to review.
Follow down for the synopsis, review and essential links to mental health charities, as noted within this book.

In To Be a Gay Man, Will Young speaks out about gay shame, revealing the impact it had on his own life, how he learned to deal with it, and how he can now truthfully say he is gay and happy.

We know Will as a multi-platinum recording artist, Olivier-nominee, and the first winner of the Idol franchise. But his story began long before his first audition. Looking back on a world where growing up being called gay was the ultimate insult and coming out after a lifetime of hiding his sexuality, Will explores the long-lasting impact repressing his true self has had.

As Will’s own story demonstrates, internalised shame in childhood increases the risk of developing low self-worth, and even self-disgust, leading to destructive behaviours in adult life.

Will revisits the darkest extremes he has been to, sharing his vulnerabilities, his regrets, tracing his own navigation through it all and showing the way for others who might have felt alone in the same experience.

Here you will find a friend, champion and mentor, breaking taboos with frank honesty, and offering invaluable practical advice on overcoming the difficult issues too often faced within the LGBTQ+ community. 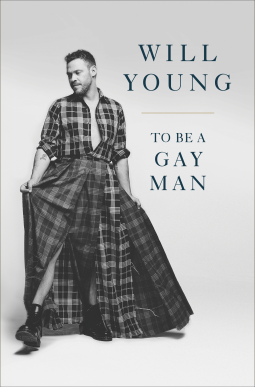 The book opens, practically with a smile. Who can resist reading about a crisp autumnal morning, even if there is a rude awakening by Nellie, Will Young’s daschund who wakes him up and goes on to the podcast he and Chris Sweeney have founded, called the Homo-Sapien’s Podcast.

Will Young talks candidly about the online communities that go about Gay-Shaming. I’m heterosexual myself, but accept everyone and it’s absolutely emotional and shocking to the core. I am impressed that Will Young has got the courage to tell the world about what he found. In this book there’s definitely a certain amount of strength of character.

He then goes onto talk very personally about his family and relationship with his dad and the bullying within the education system and how he reckons LGBTQ is still not addressed properly. What is good, is he backs it up with facts, using The Trevor Project in the USA and Stonewall in the UK for examples and for research into his basis. It makes this a stronger book for it. It’s a real mix of facts, figures, his personal experiences and opinions.

He also addresses the layers of being gay, which may be evident if you have a friend who is in the LGBTQ community or are within it yourself. He also backtracks in time and talks about what it was like in the 1980’s, drawing upon Freddie Mercury and also the detrimental effect parts of religion has had. He also talks of the effects of AIDS in-relation to some of the “public notices” put out and the effects and then even further in time on the government’s “Section 28”, which is more in the present times.
He does touch on theatre and film, but more in-terms of role models, or rather lack of role models who are gay and what that would mean to him and also how the stereotyping when writing a role for a gay character and talks of some actors at a particular time.

You can practically feel the pain leaping off the page as he talks about his prep-school years. He’s also honest about the growing-up and the sexuality side of that time of life and the opening up to a friend.
There are also moments I’m pretty sure some people would bury, never to be repeated again, but this is enlightening and courageous as he talks about regrets and also the shame he has felt and what he has had to deal with.

He touches on Pop Idol and gaining confidence and although he talks a bit about sex, it isn’t in any crude way at all and has a point, but then do does absolutely everything that is written. Everyone can take something away from this book, learn something new or have something clarified or relate to it on all sorts of levels.

He also touches upon the sense of community he does feel and also a bit about volunteer charitable works he is involved in, which, again shows another slice of his life.

Don’t get this wrong. This isn’t a “poor me” type of book. I’ve seen those and this definitely is not one of them. This is very different to those. It’s inspiring and raising awareness and is thought-provoking in a non-pretentious way, which is impressive. He also doesn’t appear to shy away from anything, but tells it how it is for him and it feels honest.

Later, the book moves into his mental health and having a breakdown and PTSD and how it came about and how he seeked help and how he felt. It goes further than that and on closer inspection, there are more parts that are thought-provoking and perhaps some people will also be able to gain, not just knowledge about Will Young, but also certain things that could apply to their lives and that could just assist someone that little bit, but it isn’t a self-help book as such though. He delves into the conditions of drealisation and depersonalisation that he has and going into therapy.

He details what he found in another book, other elements that, it doesn’t matter who you are, what you do, your sexual orientation, that could be beneficial to people as he describes Perfectionism etc and how that is for him, but really you can transplant your own life, if you are a perfectionist etc. At the end, head to the Appendix. It is very responsibly and thoughtfully got CBT Techniques  and then in the second Appendix there is Help and Support contacts.

Will Young writes about how he wanted to connect with himself. The book, I think has enough within it that there will be people who could potentially find it so helpful not to feel alone. The fact that is an extensive list of charities too that specialise in LGBTQ is fabulous. No one should be alone and please, if you are having any issues with mental health or anything, please know that there is support out there. I have listed just a couple from the list Will Young has in his book. They are there for the LGBTQ community and this includes families too.