I have read and reviewed a huge amount of very good books. It has taken a lot of time and consideration to whittle them down to create the Top Book Choices List. All those that did not make this particular list, were incredibly close. I have added links so you can easily see what the books are about. The books are in no particular order. Look out for my top Adult Non-Fiction List and my top Children’s Fiction List, both are in separate posts.

What Lies Beneath by Adam Croft Click Here for More Info

Us Three by Ruth Jones Click Here for More Info

The Colours by Juliet Bates Click Here for More Info

One Step Behind by Lauren North Click Here for More Info

The Unravelling by Liz Treacher Click Here for More Info

Enthralling and enchanting from beginning to end with curious characters. Postscript Murders is mesmerising and captivating.
Thank you to Hannah Robinson at Quercus who went to great lengths to get this book for me to review.

Please find the blurb and my review below.

PS: Thanks for the murders.

The death of a ninety-year-old woman with a heart condition should absolutely not be suspicious. DS Harbinder Kaur certainly sees nothing to concern her in carer Natalka’s account of Peggy Smith’s death.

And that Peggy Smith had been a ‘murder consultant’ who plotted deaths for authors, and knew more about murder than anyone has any right to…

Well then DS Harbinder Kaur thinks that maybe there is no such thing as an unsuspicious death after all.

From the sleepy seaside town of Shoreham to the granite streets of Aberdeen, The Postscript Murders is a literary mystery for fans of Anthony Horowitz, Agatha Christie and anyone who’s ever wondered just how authors think up such realistic crimes…

PS: Trust no one. 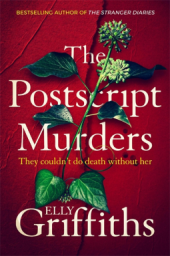 Peggy is a peculiar old lady with her diary as she meticulously takes notes of what she sees along a sea front. She is particularly suspicious of a couple of men and is later found by Natalika in her home and the contents tell a story within itself as Natalika starts to go through her belongings and tries to unravel exactly who she was and what she did and why her name appeared in so many books as it becomes curiouser and curiouser. It makes me think of tv series, Through the Keyhole in a way as the deeper you get into the book, the more you wonder “who lives in a house like this” and try to guess just who Peggy really was in Seaview Court, although it takes a more sinister turn. The book in someways, circulates around the many books within what was her flat as the mystery delves deeper. Throughout the book  are many crime fiction titles, but listed to become ingeniously part of the story. There are also other references from other mediums of entertainment too.

Harbinder Kaur is 36, unmarried and still living with her parents, which may be relatable to so many around this age and suits her. She is a detective sergeant, which her parents seem very pleased about. She does have one drawback and that is, she hasn’t yet told them that she is gay and it all becomes a bit complicated when the family have guests around and that eternal question that single women get faced with, whether you are gay or not, of if there is a boyfriend on the horizon type of thing is asked. Elly has captured Harbinder’s reaction very well.

Benedict Cole is also looking for love, since leaving St. Bedes and has some romantic idea in his head that you actually meet someone whilst walking by the sea or in a library and not online and has his eyes set on someone.

Just as the mystery is something readers can enjoy delving deeper into, so are the characters lives as time passes by. Author, Dex Challoner is also one of those intriguing characters within Shoreham to get a look inside his life and a glimpse into Millionaire’s Row.

There are twists and turns as more deaths occur, throwing up more into the mystery in what becomes a book that delves into not just the mysterious character of Peggy, but also the world of authors, publishers and literary festivals, such as the one in Aberdeen. Then there’s also Natalika from Ukraine, who is also embroilled in crypto-currency from when she lived there and there may be Ukranian mafia after her. All this is enough to wonder even more what the connections are to Peggy and to keep the pages turning.

Letters are found between Peggy and Joan, which seem poignant and particularly pertinent to their life stories, at least in part, going between many topics and reading letters is often fascinating.

It is an absolutely enthralling book acknowledges a lot, from books to tv creations to cities to festivals, all weaved in and out of a mystery of very intriguing characters.