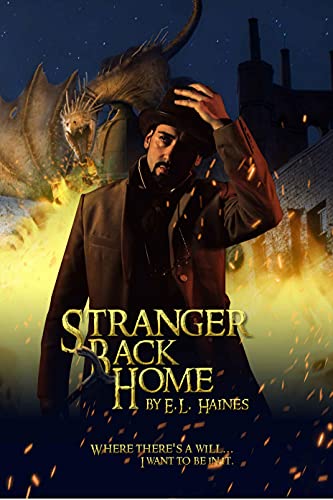 Stranger Back Home by E.L. Haines is a well-crafted fantasy book for Young Adults and Adults alike who enjoy this genre. Thanks to E.L. Haines for contacting me via my Contact Me page on my blog to request I review this book and for gifting me a copy to review from. Find out a little about the author, the blurb and the rest of my review below…

Ethan reads all the time, and writes so that you can read. He travels the world, ignoring the usual boundaries of space and time, collecting stories, which he loves to tell almost as much as Sparrow himself does.
He has visited more than 25 countries in person, and perhaps more than a hundred in books. He has also time-traveled to more than 40 different years in history. We won’t tell you exactly which ones.

One day, your father is a renowned diplomat. The next day, he’s an infamous terrorist.

When Sparrow is summoned to the reading of his father’s last will and testament, the most he hoped for was a minor bequest. Instead, he inherited suspicion and accusations from the Empire that his father helped unite.

Locked away in a vault are the secrets that will reveal Xavier DuMont’s mysterious past and shine a light on Sparrow’s future. Perhaps even the future of the entire realm.

Of course, these secrets won’t be obtained easily. Especially when everyone in this magical world seems so casually racist.

Told in the first person, the character of Sparrow really takes you with him into the fantastical dystopian world he and others find themselves in. It gives Sparrow a really compelling voice, as though the storyteller is with you.
There is a map of Middle Telleron, which is great for illustrating the size of the area and the places around it, and in detail, a map of City of Dragon’s Mouth where the more official government buildings are and where the upper and middle classes reside.

Apart from Sparrow, there are also orcs and an old wizard, gobins, dwarfs as well as humans and halflings. It’s a bit The Hobbit/Lord of the Rings like in this respect and readers who are fans of those books will enjoy this. The world building is is done well and the writing is beautifully descriptive of the places and of Lazaretto Manor, where you can be met by a butler who is a ghost and there is talk of vampires who are pretty fiesty.

The book has a grounding in the real world too and almost straddles between the fantasy and world we know as it highlights issues, such as a grim robbery happening and other social and class issues. There are also jobs, such as tax collectors, barbers, actors and there are even laws. There are also family fueds about life choices, conflicts and tensions amongst characters as tensions rise due to suspicions being created due to certain events surrounding Sparrow’s father.
This all adds something more identifiable, in this otherwise, strange, yet intriguing world that sees peace and unrest within it as well as mystery, the prospect of kidnapping or death looming, secrets and a touch of humour. There is also the existence of retirement, but not as we know it…

The book sweeps you along into its world as there are so many hooks within it and it is pretty entertaining to read.